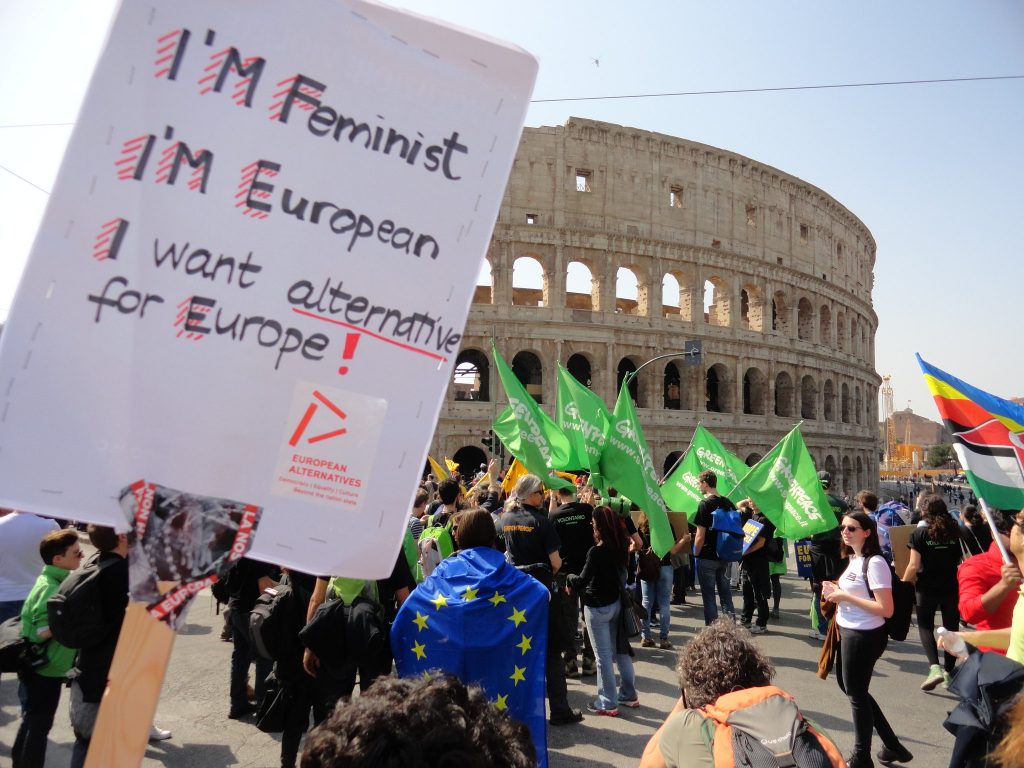 The European Parliament opened its doors to the French president Macron last week to hear his vision for the European Union: a more integrated Europe to safeguard freedom and democracy against the perils of nationalism, illiberalism and authoritarianism at home and abroad; a European sovereignty to complement the national ones. This plea came on the back of his previous suggestions to reboot democracy in and of the EU, with a series of “democratic conventions” – intended to give citizens a voice in a new transnational conversation about the future of Europe – as the most resounding.

However, as a closer look at this apparently citizen-friendly innovation shows, it is questionable to what extent genuine progress towards a democratic renewal of the Union can be made via an executive fiat, no matter how well intentioned. Macron’s is a top-down approach concealed under a thin layer of citizen legitimation. Given the obvious fact that the elusive European citizen can only be (self)realised bottom-up, by virtue of her own struggle for rights’ and identity recognition, is there something already existing within the institutional arsenal of the EU that can serve as a channel for participation?

Preceding Macron’s speech by one week, one other important event for the future of democratic politics of the EU that might provide an answer to the question above went largely unnoticed. The ECI Day is an annual event hosted by the European Economic and Social Committee (EESC) in collaboration with civil society organizations actively working on the European Citizens’ Initiative (ECI). This year’s theme, Working Together, underlined the value of cooperation and the shared responsibility for promoting active citizenship by EU citizens and institutions alike. It took place amid the long overdue process to revise the Regulation with the European Commission legislative proposal for a new regulation on the ECI setting the stage for discussions.

The ECI is the first transnational instrument of participatory democracy allowing one million citizens to invite the Commission to initiate legislation on a matter those citizens deem important. It was suggested for the first time by civil society during another convention, that ‘On the Future of Europe’ in 2002 and found its way to the Lisbon Treaty after surviving the failure of the constitutional treaty in 2005. First launched in 2012, it was ripe for reform already in 2015, but the Commission sat on ituntil very recently thus fuelling suspicions that its support for the inclusion of EU citizens into the Union decision-making was merely declarative.

To date, almost 70 ECIs have been launched, but only 5 managed to pass the threshold of collecting one million signatures. While the Commission has managed to overcome some of its unwarranted initial fears and has gradually loosened its Draconian interpretation of the admissibility criteria for incoming initiatives under the pressure of all other stakeholders concerned, there is still a sense of urgency to adopt the new regulation in order to address a plethora of issues that impede the ECI from becoming a more widespread tool of citizen participation. All parties agree on the technical improvements to be made, ranging, for example, from signature collection to personal data protection simplification. The key stumbling block is far more political: how to ensure a timely and comprehensive legislative follow-up (of the five successful ECIs, the EC delivered on two).

The right to have rights

Against this backdrop, one of the workshops, entitled ECItizen: Building synergies to promote European citizenship, gathered organizers of recent ECIs that tackled EU citizenship rights – from those of UK nationals threatened by Brexit to civic education for Europeans. The discussion was rooted in the basic assumption that every citizenship is about rights, participation and belonging. It yielded important conclusions to guide future citizenship policy and ECI institutional change.

Firstly, in the words of Hannah Arendt, rather than any particular right, citizenship is ‘the right to have rights’. We often tend to think of European citizenship as little more than an assemblage of civic rights that are triggered once we cross the border in order to, for example, work or study in another member state. Thus construed, it is reduced to the facilitator of free movement of people, a passive status rather than an active practice, to an economy-enabling, curtailed political bundle of rights rather than a transnational active pursuit of freedom. On the contrary, if the European citizen is to be empowered, political rights ought to move from the penumbra of EU citizenship to its core dimension.The ECI is the latest and least known addition to the catalogue of such rights. If rendered effective, it could become the vehicle through which we can not only safeguard existing, but claim new rights at the European level. But the awareness of these rights must be widespread. This month, the Commission launched an ambitious three-year long campaign to inform citizens on the benefits of ECIs. Long overdue.

Secondly, European citizenship should be about transnational participation. The Stop TTIP ECI sets a great example: when rejected by the Commission back in 2015, the organisers proceeded to collect signatures anyway, amounting to over 3 million statements of support against the now deceased Transatlantic Trade and Investment Partnership. Furthermore, they won a case in front of the Court of Justice of the EU proving them right to ask the EC to stop legislating on a treaty rather than just being allowed to ask to legislate. Despite all odds, in this case European citizenship was enacted through participation across the EU. The newly established online collaborative platform will now allow likeminded citizens around the Union to identify issues to place on the EU decision-making agenda and connect much easier and earlier than before.

Finally, once EU rights are assured through sustained participation, the last component of citizenship – a sense of belonging and allegiance to the Union so often bemoaned as lacking – will be free to emerge. It took Brexit for the ‘remainers’ in the UK to realize the value of an ECI as a tool for claiming their rights and protecting the European dimension of their identity. Launching initiatives on other citizenship-related issues, from transnational lists for the European Parliament elections to combating discrimination will not only solidify this instrument but help open new civic spaces in a time when they are shrinking at the national level in a growing number of member states.

To conclude, paraphrasing a Belgian Minister’s famous retort about the EU, 25 years after its inclusion in the Treaties in Maastricht, European citizenship is still an economic giant, a political dwarf and a military worm – the latter referring to the capacity of the Union’s citizens to actively stand up for and demand new rights from the EU. The reinvigoration of the ECI is the first step to overcoming this state.

Citizens Rights
With ACT4FreeMovement we campaigned for freedom of movement with EU citizens.
Read more