A Movement for Real Democracy

You are here: Home / Euroalter News & Stories / A Movement for Real Democracy 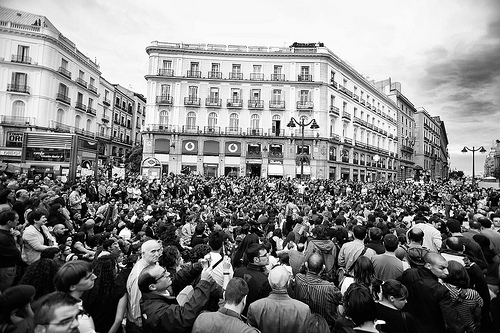 Interview with G. G. Clavell on the present and future of the movement of the indignados and the transnational dimension of protest.

Could you sum up the three most important demands you feel are associated with the movement for real democracy?

-End to corruption (which is widespread among politicians, tolerated by many and goes mostly unpunished)

Other important demands are internet neutrality and free exchange of internet files among peers, and generally a chance for the younger generations and the vast sectors of the population who were left out of the ‘pact of the transition’ to have a say.

Do you think these demands are achievable within a purely national context?

They could be, if it wasn’t because the drive for neoliberal reform is global. If there wasn’t such strong pressure on politicians worldwide to rule in the interest of corporations, national reforms would be achievable within a national context.

In a way, the real outcome of the globalization process has been making us less able to participate in politics in a meaningful way, because if whatever is approved at the local/national level goes against the current global hegemony, it gets ditched. My feeling, then, is that if European institutions do not show a willingness to break with the current economic consensus, the demand to regain control of politics at the local level will increase. Either Europe starts acting as a space where people have their voices heard in a meaningful way, or Europe will stop being a useful or desirable space where decisions on our daily lives are taken.

The Spanish 15-M movement seems to have been an inspiration for protests throughout Europe. To what extent do you think we can already speak of a trans-european movement? What do you think is still needed to guarantee a better transnational coordination and better forms of collective organisation beyond the national level?

I don’t think we can speak of a trans-european movement. The ‘inspiration’ (if you want to call it that) for the 15m came initially from Tahrir and the middle-eastern revolts, and then from recent political and economic events in Iceland (referendums, change of government, new constitution being drawn up with participation and heavy reliance on social media and the internet, etc).

I’d say transnational coordination at the moment is non-existent. Would it be desirable? Yes, but it feels like in the same way that MS have not been able to build a European agenda and collaboration, the population of the MS does not feel a strong association with events elsewhere. There might be two factors that contribute to that: on the one hand, Spain has enough problems with its own identity as a state; on the other, it is hard for Spanish people to feel their problems are the same as in other Northern or Central countries, specially when our history and reality is so different: our economies are different, our political system is different, and, most of all, our economic conditions (job instability, minimum wage, etc. ) are worse than anywhere around us. The idea that we might come up with a shared agenda at the European level seems very alien to most, as many feel our problems are not shared by the rest of Europe.

If the process of European integration wasn’t a race to the bottom, this might change. But I just don’t see that happening.

I do think, however, that there is a scenario that could make ‘Europe’ relevant: a process by which national movements got together in the struggle -not necessarily by sharing the same demands, spaces or languages, but by seeing their belief in change and justice replicated everywhere else. A unity in action is the only unity I see emerging. And this kind of unity has no borders -not the Pyrenees, nor Schengen, nor the Mediterranean…

In its turn, the Spanish movement has been inspired by the Arab spring and Jasmin revolution movements. Is expanding and building on this connection a priority for the movements in Europe? Should it be?

I’d say most people feel we don’t need a connection beyond the ability to inspire each other and exchange messages of support.

That is not to say that having meetings and spaces where to exchange ideas and experiences wouldn’t be good or desirable, but not essential in terms of the movement keeping strong. The reasons why the 15m has managed to capture the imagination of most of the Spanish population (support rates have not been below 80% since the movements started) has a lot to do with national events (historical, political and economic) and by the way the crisis is being managed (by doing exactly the opposite of what people need, and putting private interests before the democratic mandate of the Socialist party in power).

If other countries managed to strike a chord with their own populations and start taking their future into their own hands, unity in action could emerge. If something similar to the 15m, the Arab Spring or the Greek events happened elsewhere, building connections would be more of a priorit.

The movements have a clear diffidence towards existing political structures, be it parties, trade unions, or supranational organisations. How should the movement then negotiate the question of power? What kind of strategies do you think will allow for the possibility of changing current legislation and decision-making structures? Do you see the creation of new political parties as a viable outcome of the protest movements?

The movement is clear on one thing: everyone who’s claimed to represent the common people so far have done nothing but betray us all. There is a widespread feeling that, whatever we vote (even when we do), we always lose.

So there is a rejection of anything that came before, and ‘they don’t represent us’ has become one of the key slogans of the movement. However, I don’t think this means that the movement is against representation per se. Just the representation we’ve had for the last 35 years, where those who said to represent us, be right or left, have been unable both to represent our needs through their policies or to live lives that resemble ours.

I don’t think the movement is thinking about power, to be honest. The movement is trying to bring sanity and common sense into the political debate and the social landscape. It wants to convince, not impose. And it wants to bring change by the power of millions. In a democracy, this strategy should be enough to bring about change: if most people support, change, change should happen.

However, if the current system is unable to fulfill some of the demands of the movement, it will just reinforce the idea that ‘they call it democracy, but it isn’t’. As the crisis deepens, and those who claim to represent the population show once and again their utter inability to make the right choices, the movement will have to face the issue of power. Right now, it is just about showing that we are millions, and that that should come before anything else -even by their own standards.

Could new or existing parties stand up to this challenge and show that representative democracy does not have to be a space for private interest and corruption? Maybe. Time will tell.

We have all followed with excitement the spectacle of thousands of people coming to collective decisions by consensus in crowded public squares. What organisational forms do you see the movement taking in the coming months? How can longevity, organisational capacity, and effectiveness be guaranteed, while maintaining its bottom-up approach?

I think the popular assemblies will continue, both in the physical realm (squares, neighborhoods, etc) and online. A whole generation is being socialised in the struggle and political debate, and this will continue.

Many people in the movement have had no prior political experience, so the collective process is being done by trial and error -which means that there are mistakes, but also that people learn from them. This wheel had been stored deep down for so long that there is, to a certain extent, the need to reinvent it. Hence the consensus, hence the emphasis on direct representation. The process is still in the making, though.

In the near future, I think that the capacity of the local assemblies to keep strong and of the internet to build spaces of mutual support, encouragement and strategizing will surprise many and mobilize more. The movement has achieved significant things already -in my opinion, it has thoroughly changed the political scenario, the language, the future… even if many want to downplay it. The bottom-up approach will be ensured by the mobilization at the local level, by the emergency of the situation provoked by the mismanagement of the crisis (and of the prior boom) and by the democratic radicality of the proposals.

Finally, do you think parliamentary democracy needs to be replaced, or just improved?

I’d love to improve parliamentary democracy. I’d love for it to be possible to change things through elections. I do feel, however, that our democracies have long forgotten who they serve and what their purpose is. They don’t seem to take seriously a word of what they preach. If they can’t, won’t represent their constituencies and the rights of the people, then they should be replaced. The feeling in the street is that if democratic reform is impossible, democratic revolution will be inevitable. The ball is on their court.