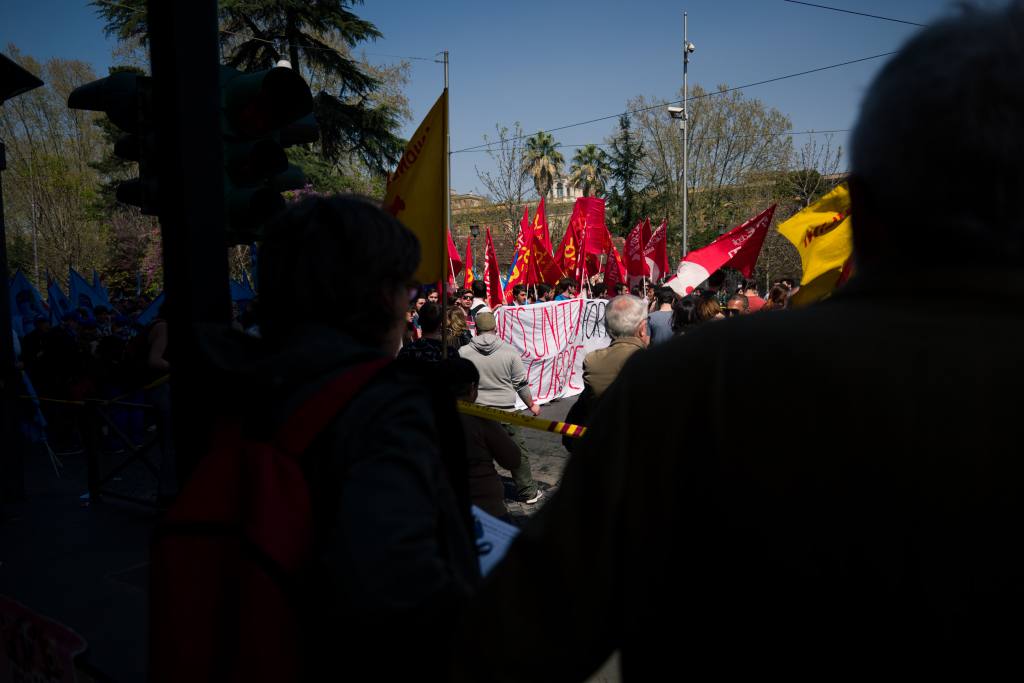 Article by Gianluca Solera, writer, journalist and member of the EA advisory board

One month ago, representatives of European social organisations and movements gathered in Florence on the occasion of the twentieth anniversary of the first European Social Forum, which gathered in Tuscany thousands of people of the anti-, alter-globalisation movement from across the continent. It was the time of the mobilisation against neoliberal policies, and against the war in Iraq. Many of those who were there proudly remember the one-million European march against the war held on November 9, 2002.

Twenty years later, according to the organisers of the gathering, the registered entities are around 150, and delegates about 700. Nevertheless, the social and political climate is not any longer the same. Many participants have grey hairs, and right-wing parties are running the hosting country. Keywords used at the conference are more about the issues at stake than about solutions :  wars, climatic crisis, inequalities. The meeting room at Palaffari has 475 seats, and the closing day, a Sunday morning, almost half of the chairs were already empty. The atmosphere is that of a family reunion after so many years, and national and local media are barely paying attention to the happening.

The atmosphere is that of a family reunion after so many years, and national and local media are barely paying attention to the happening.

Organisers managed to do however something which was difficult to assemble : they successfully invited different entities to converge to Florence and run their own events around the Social Forum. Thus, the two days of the Forum became four, including the single activities of the European civic forum, Florence’s academic institutions, or local and European NGOs.  Funds were limited, but the organisers decided to rely upon civil society’s funds and remain autonomous rather than asking local governments for financial support.

Many were the strong and powerful contributions that were made at the speakers’ table. I can mention Marta Lempart (on the struggle of Polish women for sexual and democratic rights), Souad Wheidi (on the conditions of migrants in Lybian concentration camps), Vittorio Agnoletto (on the profits of Big Pharma during the pandemic), Gonzalo Berrón (on the growing role of private companies in global governance), or Dario Salvetti, representing Florence’s GKN factory collective who have been mobilising against layoffs and relocations.

Several participants pointed out however at the lack of debate in the plenaries, the so-called « Convergence assemblies ». They lamented the fact that there was no debate at all ; pre-planned interventions were following one another without any single possibility to ask something. It was a kind of experience of « democratic centralism », which reminded me a lot of traditional Leftism. You had to wait for the lunch break to ask questions to speakers, if they had time for it… I guess that organisers wanted to offer as much time as possible for different interventions, but the outcome was rather annoying.

What I liked at least was the way how the topics of the Convergence assemblies were formulated, general and open, such as : « Being right is not enough: how to be effective in the time of emptied democracy? », or « From resentment and loneliness to collective hope: how to beat the consensus of right-wing forces within society? ». The lack of debate however clashed with the intention formulated in those titles, because each speaker was addressing his own thing, and there was no coherent exchange following a consequential path.

When speaking with some of the participants, like my friend Roberto Spini, who was among the members of the local organising committee, and others, I could pick up the main concerns and open questions that were floating in the room.

The first one was that it is really not possible nor relevant any more to declare that the alternative, antisystemic movement is right, and the others are wrong. That stand was still a powerful weapon twenty years ago because the mobilisation was very strong and had an effective influence on decision-makers and institutions. This is not the case any longer. A participant coming from Brasil was for example publicly pleading for establishing unity among diverse citizens’ platforms and currents to beat resurgent fascist ideologies, meaning that divisions in society based on the assumption that someone is more right than others, or that he is more progressive than others, would be paving the way for authoritarian narratives. Unfortunately, many in the audience did not seem having catched the point.

The second point that was bouncing back in the room as a thorn in the flesh was that the trade chain with political parties and politicians in Europe is definitely broken. Generally speaking, nowadays, the alter-globalisation movement does not have clear political party references in European representative democracies, and it is more isolated than ever. I did not hear much analyses on the issue, but that coupure was obvious to everybody. To be honest, there was a recorded contribution by a member of the European parliament from the Spanish Podemos party, but is was read out, unspontaneous and rather ideological!

You could feel that participants were looking for a common thread, were calling for reanimating the transnational networks, and reconnecting with the local contexts and communities located in between, but the lack of a political project is rather limiting the available options. On Sunday afternoon, before the event closure, a working group proposed as an attempt at a solution to launch a new mobilisation. « A common path begins after too many years of thematic and geographic fragmentation that has weakened anyone fighting for social and environmental justice, in any country and at any latitude », say the organisers. They have in mind the creation of a coordinating table between all the organisations and movements, with regular meetings and two objectives: including in the coming months all the actors, small and large, who are willing to unite and coordinate to tackle together the major problems of our time ; and working to build global civil society mobilisations, starting with an AlterCop at the next UN climate conference, bringing together movements across generations. Will they have the strenght to do it ? Will younger activists feel the need for a centralised and coordinated action at this level? Will civil society practitioners, academicians, or non-activists listen to this call?

The easiest common thread that was branded at Convergence assemblies was pacifism. The audience applauded last November 5 Peace march which gathered 100,000 people in the streets of Rome. Their slogans were: Ukrainians have the right to chose how to resist the Russian occupation, but we support nonviolent means ; We believe that the conditions for a peace / ceasefire deal are there; European nations were wrong in contributing to escalation ; We need instead a new Helsinki process initiatied by the peoples. Right, but: Where are those conditions for peace many are talking about, while the Russian military is systematically destroying energy infrastructures to punish the Ukrainian nation and create an humanitarian crisis? And where was the progressive peace movement when Russians were refining the Grozny doctrine in other areas, and particularly in Syria, targeting those cities who refused Assad’s dictatorial rule, and punishing the civil population there through sytematic bombing of residential areas and civil infrastructures, and the testing of new weapons? Well, it was silent, maybe because they did not have workable recipes corresponding to their ideology. Russians are now applying the same barbarian but refined methods, and we pretend to stop the war with negotiations. For who’s sake? On November 5, there was another peace march in Italy, it was organised in Milan by those who ask to support Ukrainian people with all means, including militarily. That was not even mentioned at the Florence’s Social forum. When I noticed that, I remembered what was said earlier by that Brasilian participant on antifascism.

I have just watched a unique documentary film produced by ARTE Tv, « Russie – le laboratoire syrien », which analyses how Syria was used by Russia as a training field to prepare the next bloody military campaigns. I watched that the day following the closure of Florence’s European social forum, and it affected my understanding of progressive militantism. If there must be a good reason to bring together social movements, NGOs and citizens’ initiatives striving for rights, that must be to stop fascism, whose core concept of the social construct is based on the annihilation of individual freedom and dignity.