The Voice of the Majority: an example for political change in Germany

You are here: Home / Euroalter News & Stories / The Voice of the Majority: an example for political change in Germany 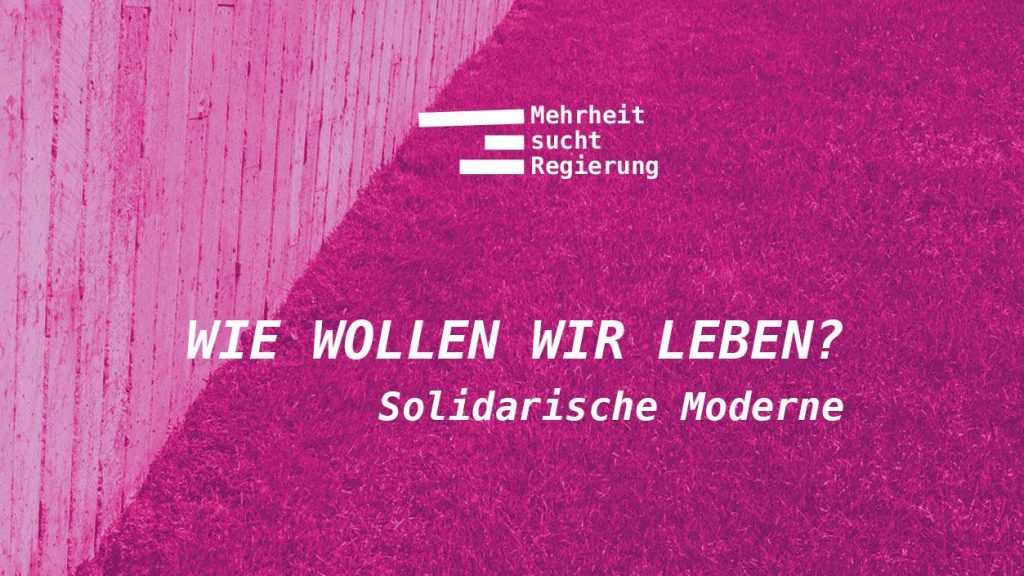 Ahead of the German elections, we are co-organising a series of events together with DiEM25, ATTAC Germany and the Institut Solidarische Moderne (ISM) to discuss the possibilities of a Left majority for the country. What is the European dimension of the Bundestag elections? What would we want to change, if we had a Red-Red-Green government?

The event series The Voice of the Majority wants to be an example, an example of how the desire for political change can be articulated beyond established political routines. Three events can’t change the world. That’s why our idea is based on the fact that these ideas are already circulating in different places and in different organisations and on the premise that people are doing the same thing in other locations.

1. Social Modernity: How do we want to live?

Political change is dependent on revolution in our everyday lives, thought, lifestyles and collective identities. Behind personal choices there are always social structures: rights, resources and security, for all.  Conditions for an open society are currently under attack: Our way of life and diversity as the legacy of 1968 is under question today and right-wing populists are fighting a cultural war against the idea of the “dirty left-red-green 68er German”. The left has difficulties answering, but nevertheless has posed the question: how do we want to live? And how are demands for individual freedom and societal security compatible?

2. Social Europe: Where are we living?

Europe has to become, at a minimum, a social union. Germany is a central player in European politics: Austerity, low-wages and export surpluses – Made in Germany – is destroying the livelihoods of a whole generation. The European Union today seems to be no more than the enforcer of brutal austerity politics: an opaque, bureaucratic monster. But Europe is more than the EU. In the shadow of neo-liberal structural reforms in the south of Europe, new approaches to democracy and solidarity are emerging. These approaches could become the paradigm of a new, political idea. What role can and should Germany play in a peaceful, democratic and social Europe. How can Europe become a place of global justice? What is the European dimension of the Bundestag elections?

3. A society of migration and solidarity: Who are we actually?

Social justice is more than just a question today. Our society is a part of a global economy  and at the same time the world is part of our economy. A new, left, social politics will also have to prove itself in the field of migration. The summer of migration once again brought to our attention that justice is not only a question of how much, but also of who. When global and national inequality meet, then new political constellations emerge and our coordinated systems are challenged. This is all the more striking as the question of “social justice” may be crucial for this election, as well as whether a potential progressive government actually deserves that name. Who are we actually? What does social justice mean today: a sanction-free minimum social assistance for every German citizen or for everyone that’s here?