You are here: Home / News & Stories / New Book out – Shifting Baselines of Europe 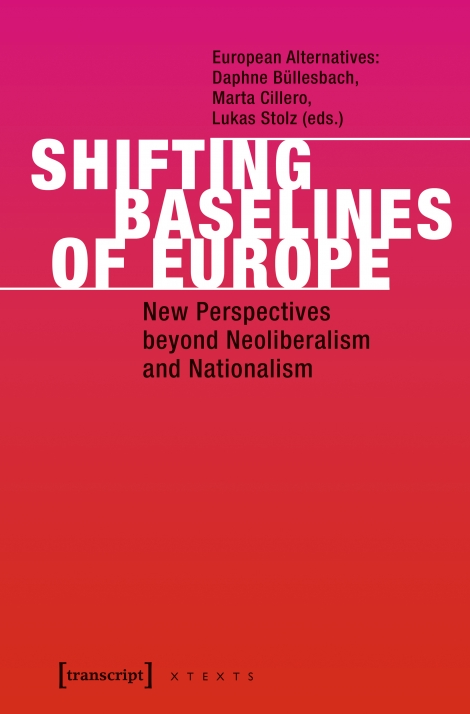 What if another Europe already exists? The new book of European Alternatives follows this question and explores a Europe beyond Neoliberalism and Nationalism. Etienne Balibar opens the book, asking for “Our European incapacity”. In her reply Ulrike Guérot reflects on what “Our European capacities” could be. Together they tackle the fundamental crisis underlying the European integration process, the missed opportunity to become a Union of Citizens by giving up on national sovereignty.

The publication is inspired by a meeting of 80 activists, researchers and artists from across the continent which took place in 2016. European Alternatives invited them to its biannual Campus to develop strategies for an open and democratic Europe. Many of the projects presented at the Campus are to be found in the book:  from the municipal level to the level of transnational media, from technology and counter-surveillance to a concrete proposal to revive the European refugee policy.

The book  proves that a shift towards a new way of thinking and doing politics is not only possible, but actually already happening.

“The ideas and projects presented in this book are exactly what the debate on Europe needs right now.”

“Cities could be places of radical innovation in politics, spaces of actual reinvention of democracy”, argues Giuseppe Caccia, scholar in History of Political thought, in his essay opening the chapter. It is often the city, the space of social and cultural condensation, that provides the breeding ground for new ideas and formations, where many of these movements have started from. In Spain we have seen major cities being taken over by platforms emerging from the square occupations. Putting the citizen back into politics was the recipe to their success: what answers to the crisis of representation can we take from there? City-makers, commoners, urban social movements, mayors, councillors, and activists that are helping to create, promote and develop new urban experiences come together in this chapter. Contributions e.g:

Shifts in media technologies have been at the centre of the debates about the latest shifts in politics. While new media are now referred to as one of the main underlying factors for the era of post-truth and the rise of populists, some years ago they were celebrated for enabling horizontal communication which would pave the way for horizontal power structures. In a time of post-truth, how can we combat the rise of a false reality?Which media infrastructure is necessary for alternative narratives that bring a transnational agenda to the citizens? What can be learned from existing alternative media platforms in this regard? Is social media still offering resources for new ways of protest? And how do we deal with the new power of algorithms when for most of us they are blackboxes? Contributions e.g:

All of the latest major events in European politics have had a twofold implication. Wherever the challenges grew, the potential for a progressive European civil society also became visible. From austerity politics to free trade negotiations, from the refugee movement to Brexit, from nationalist governments to the rise of far right movements: in all these cases European citizens organised themselves and stood up for a Europe of openness, tolerance and solidarity. But despite these signs of hope, the overall political situation undoubtedly requires much more in terms of coordinated answers from a progressive left. Therefore the main question of this chapter is: how can existing actors and networks improve their cooperation in order to build capacity and gain political influence? In order to reclaim discourses, streets, parliaments and governments, liberal civil society has to “get out of its comfort zone” as Pia Eberhardt from the Anti-TTIP protests puts it. Contributions e.g:

PROJECTS & ORGANISATIONS PRESENTED IN THE BOOK

European Democracy Lab is a Berlin based think-tank working towards a more social, politically equal and democratic European future.// Barcelona en Comú is a citizens platform and political coalition in the city of Barcelona. //Marea Atlántica is a citizens platform and political coalition in the city of A Coruña. // P2P Foundation is an organisation with the aim of studying the impact of peer to peer technology and thought on society. //Ahora Madrid is a citizens platform and political coalition in the city of Madrid.// Cambiamo Messina dal Basso is a grass roots movements and citizens platform in the city of Messina. //Ne davimo Beograd (Don’t let Belgrade d(r)own) is a right-to-the-city initiative in Serbia resisting massive redevelopment plans in the centre of Belgrade as well as government corruption. // Human Rights Institute Bratislava, Slovakia is a NGO ghting for civil liberties and rights in Slovakia and the region. // openDemocracy is an independent global media platform covering world a airs, ideas and culture which seeks to challenge power and encourage democratic debate across the world. // Krytyka Polityczna is a network of Polish left-wing institutions and intel- lectuals that works on the elds of social sciences, culture and politics to have an impact against economic and social exclusion. // Eldiario.es is a Spanish online newspaper founded in 2012. / Abwab is the first Arabic newspaper in Germany launched in 2015. // DiEM25 is a pan-European, cross-border movement of democrats that works as an infrastructure to democratise Europe before 2025. // Syriza is left-wing political party in Greece, founded in 2004. // The Commons Network is a civil society initiative and think-tank working on a local, national and European level promoting access to knowledge and other social and ecological causes from the perspective of the commons. // European Commons Assembly is a process that started in in May 2016 gathering diverse commons activists from 21 countries across Europe par- ticipating to develop a shared agenda for the commons. // Stop TTIP is an alliance of more than 500 European organisations running campaigns and actions against TTIP and CETA. // Razem is a left-wing political party in Poland formed in May 2015. // Demos is a civic platform formed in Romania that works bringing people together to debate and organise around the values of democracy and solidarity. // New World Summit is an artistic and political organisation dedicated to providing alternative parliaments to host organisations that currently nd themselves excluded from democracy. // Democratic Union Party Syria (PYD) is a left-wing Kurdish political party established in 2003 by Kurdish activists in northern Syria. It is the leading political party in the Federation of Northern Syria – Rojava and its cantons.

Daphne Büllesbach is Managing Director of European Alternatives and curator of Transeuropa Festival, a bi-annual cultural, political and arts event. She holds degrees in Political and Social Sciences from London, Paris and Cambridge.

Marta Cillero is responsible for Communications at European Alternatives. She studied media studies, journalism and communication in Madrid, Istanbul and Chicago, and has a background in gender studies.

Lukas Stolz is special projects collaborator at European Alternatives and previously worked as a campaigner with Democracy International. His research interest lies in the intersection between politics, cultural theory and art and he holds a degree in Philosophy, Politics and Economics.