Sakharov Prize awarded to "the Brave People of Ukraine"

You are here: Home / News & Stories / Sakharov Prize awarded to “the Brave People of Ukraine” 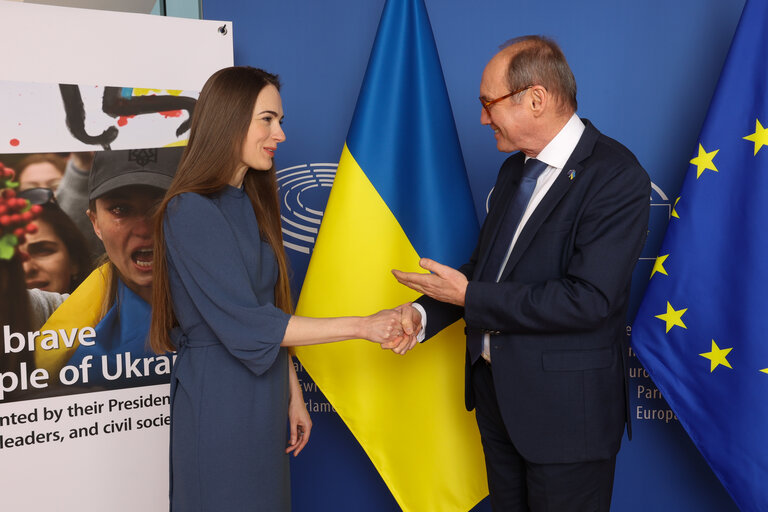 On the 14 of December 2022 European Alternatives was honoured to be attending the Sakharov Prize ceremony in Strasbourg. Here are our impressions of the day and how we hope this will enhance the right to democracy and freedom.

The Sakharov Prize for Freedom of Thought is the most important award given by the European Union to human rights work. Named after Andrei Sakharov, it pays tribute to a physicist  who conceived one of the most destructive weapons in human history; became a dissident, fought against war, for peace and for human rights, founded an association to defend the latter, and despite pressure from the Soviet regime, fought for the freedom of political prisoners and all people who were deprived of fundamental rights.

In 2022, the European Union awarded the prize to the ‘Brave People of Ukraine’ represented by their president, elected leaders and civil society. The unprecedented decision to nominate ‘all Ukrainian People’ for an award that until last year had been given exclusively to individuals, groups and organisations is aimed at  underlining the Union’s support towards Ukraine and all its population. During the award ceremony, both Roberta Metsola and Volodymyr Zelenskyy emphasised their commitment to defending values such as freedom, human rights, and the rule of law. On the one hand, the President of the European Parliament emphasised  that the values that the Ukrainian people are fighting for are the same as those that underpin our life in the EU, while the Ukrainian President stressed that, in order to safeguard these values: ‘it is necessary to act now […] to bring to justice to all those who unleashed [the war] and to prevent any repetition of aggression’.

The representatives of the Ukrainian people present in Strasbourg were: Oleksandra Matviichuk, human rights lawyer and chair of the Center for Civil Liberties (CCL) who received the 2022 Nobel Peace Prize; Yulia Pajevska, founder of the evacuation medical unit Angels of Taria, which provides medical care and support to civilians since the armed conflict in Donbas; the elected mayor of Melitopol Ivan Fedorov; Yaroslav Bozhko, representing the Yellow Ribbon Civil Resistance Movement, which plays an important role in defending the freedom of speech and resistance against Russian; and Olekssandr Chekryhin and Stanislav Kulykivskyi, representing the State Emergency Services (SES). Together with other CSOs, European Alternatives had the opportunity to participate in a discussion with these representatives.

Dealing with the topic of ‘what can we do?’ to help Ukraine, two key themes emerged. Firstly, O. Matviichuk emphasised that political decisions are not enough to help Ukraine as the priority is to defend its territories. To do this, Ukraine needs weapons and countries that can supply them. Secondly, all the representatives stressed the importance of the concept of truth. Truth as a tool to fight propaganda not only within Russia, but also externally, since citizens of the various countries, in and outside Europe, must know about the events and war crimes taking place in Ukraine.

As O. Matviichuk stated in the ‘No to War in Europe’ campaign: ‘History taught us that wars begin with propaganda, provocations and hybrid methods. We also know how they end. Either with the defeat of one of the parties and enormous human casualties. Or with a powerful anti-war movement within the aggressor-state […]. We currently lack the international solidarity movement that can find support, with anti-war appeals, inside authoritarian Russia itself. But must endeavour to build it’.

Reflecting on these words written before the start of the war in Ukraine and those spoken by the representatives during the Sakharov Prize ceremony, what Ukrainians state we can do to support and help them in this conflict between authoritarianism and democracy is to inform ourselves and help inform others to act and help others to act. The situation in Ukraine and of the Ukrainian people themselves through their representatives present in Strasbourg also underlined the urgent need for solidarity. Solidarity for the people who have remained in Ukraine, for those who have fled, for Ukraine and the surrounding countries that need the infrastructures to accommodate these people, but also solidarity for the people who oppose the war and propaganda in Russia.

In conclusion, this year’s Sakharov Prize is full of significance, expectations and hopes. “The Brave People of Ukraine” as recipients of this award allow us to understand how it is the people themselves who are the bearers of those fundamental values that we want to be safeguarded. This prize not only represents the European Union’s support for Ukraine but hopefully, will also be a way for the Ukrainian people to make their voices and demands heard and for these to be embraced in order to promote, through transnational cooperation, action and solidarity, the victory of  fundamental rights and thus Ukrainian people, that the Sakharov Prize aims to represent.