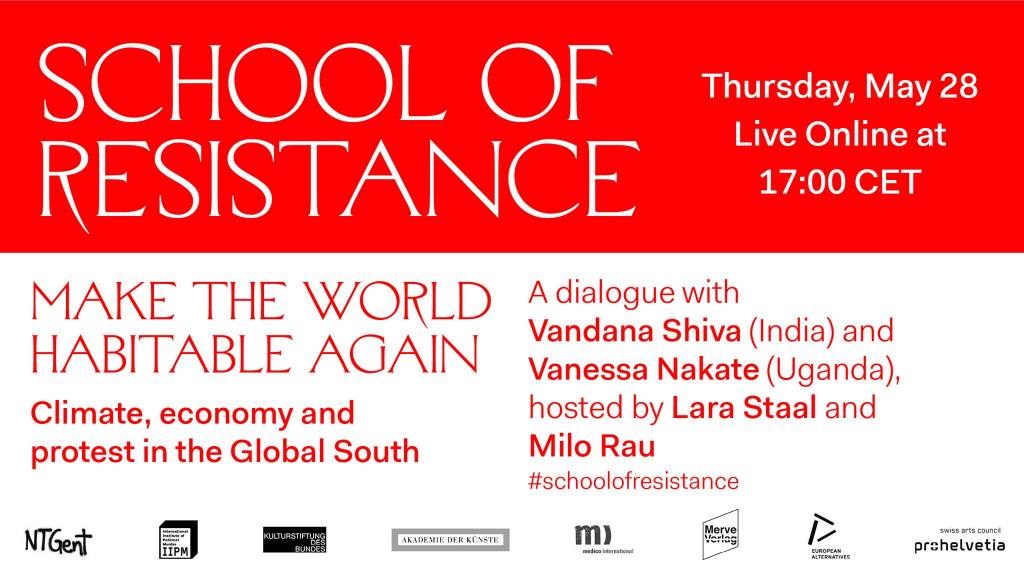 During our second School of Resistance climate activists Vandana Shiva and Vanessa Nakate address the effects of climate change in the Global South and plead for an inclusive form of climate activism.
With the world’s biggest polluters shutting down most of their industries and cutting back their use of fossil fuels, our carbon footprint has rapidly dropped by a significant amount. But whether or not the environment will eventually benefit from today’s crisis is anything but a certainty. Crucial climate conferences and negotiations that were to take place in the next coming months are being cancelled and the mantra of ‘economy first’ might replace climate concerns in the minds of the public and those in power. And what about these countries that benefit least from our fossil-fuel economies, but are already being affected by the disastrous effects of climate change today?

In the second episode of School of Resistance the Indian scholar and environmentalist Vandana Shiva will address together with Fridays For Future Uganda founder Vanessa Nakate the effects of climate change in the Global South and plead for an inclusive form of climate activism.

𝙑𝙖𝙣𝙙𝙖𝙣𝙖 𝙎𝙝𝙞𝙫𝙖 is an Indian scholar, anti-globalization author and environmental activist advocating for organic and ecological farming and the protection of biodiversity, seed sovereignty and social justice. In 1982, she founded the Research Foundation for Science, Technology and Natural Resource Policy, investigating sustainable methods of agriculture.

Being the first Fridays For Future activist in Uganda and the founder of the Rise up Climate Movement, 𝙑𝙖𝙣𝙚𝙨𝙨𝙖 𝙉𝙖𝙠𝙖𝙩𝙚 seeks to amplify the voices of climate activists from across Africa. She also spearheaded a campaign to save Congo’s rain forest and is currently working on a project to install solar panels and stoves in schools.

On April 20th, 2020, the oil price dipped below zero for the first time in history. It wasn’t the only world record caused by Covid-19. In no more than a few months, a nasty virus was able to pull off what worldwide protest marches and general strikes couldn’t do: slowing down our planet. Correction: slowing down all human activities on this planet.

Suddenly, as a society, we remember the meaning of ‘ economy’ as a way to support life and not to make profit at whatever cost. But how can we shape the future of our planet, without falling back into old damaging patterns? To solve the problems we are facing today and to come up with valuable alternatives for the future, the biweekly livestream School of Resistance creates a platform of experts of change around the world: artists, activists, politics and philosophers.