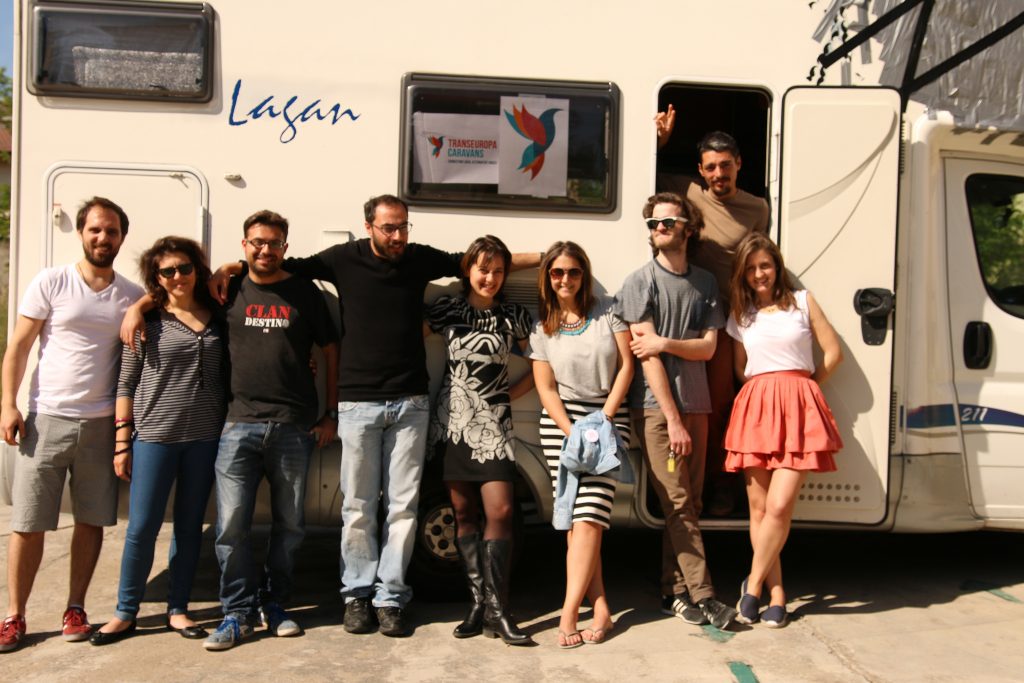 European Alternatives, in cooperation with Krytyka Polityczna and ECIT Foundation, is organising Transeuropa Caravans., where five different caravan on five different routes will be reaching 15 European countries in Spring and Autumn 2019.

The call for applications is now closed.

Check out the website of the project and stay tuned and follow our social media and hashtag #transeuropacaravans!

Activists of Transeuropa caravans travelling ahead of the European elections 2014

With “TRANSEUROPA CARAVANS: The roads to democracy” we aim to inspire EU and non-EU citizens throughout Europe to become more active in the democratic life of their place of residence. Ahead of the EU Parliament Elections, we believe that together with activists, engaged citizens and local authorities should connect and give visibility to our common struggles and solutions.

The idea of the Caravans is based on the concept of mobility, on hitting the road and settling down deeply in a new place, even if temporarily. Within the Caravans a group of activists will be travelling throughout fifteen European countries on board of five cars or caravans reaching out to European citizens at their sites of struggle, resistance and mobilization, meeting directly where they live, promoting citizens’ rights (eg. electoral), stimulating social engagement, and creating the new narratives of underrepresented citizens, such as EU mobile citizens, young people, women, minority groups. etc.

The aim of taking up this travel is to throw the light on initiatives from below that contribute to advancing fundamental rights in Europe (migrants, environmental, …), organise events in collaboration with them, and to highlight challenges and good practices in the field of EU mobile citizens political rights.

What are the Transeuropa Caravans?

Five Caravans will be on the routes agreed by the teams, local hosts and the EA’s Project Manager. Each of them will be composed of 4-5 core team members who will travel through 3 countries during a period of 10-12 days. Each Caravan will have stops in a minimum of 15 locations on their way, small or big cities. Travelling with the caravans is a symbolic term – based on practical aspects, such as the availability of team members to drive caravans long distances, these vehicles may be replaced with cars.

Routes of the Caravans

Each of the Caravans will define its own main theme of the route. There are suggested themes, such as: Central Eastern route (DE, AT, HU): shrinking civic space, antifascism; Western route (FR, ES, PT): municipalism and cities, Visegrad route (PL, CzR, SL): culture; Baltic route (SWE, FIN, EST): climate change and sustainability; Mediterranean route (IT, SI, CR): migration, borders – all themes will be confirmed with the Caravans’ teams.

The thematic scope will be worked out together by the Caravans’ team during the face-to-face trainings in March and April. The exact routes including the schedule of stops of each Caravan’s route will be confirmed by matching participants’ and local hosts’ availability but they should preferably start around May 1, and end around May 22.

1. Caravan’s routes which are around 12 days long: 10 days of activities + 2 days for a break in-between. Each route should preferably take place between May 1 and May 22.

2. Face-to-face training in Warsaw, 21-24 March (4 days): where participants will meet the rest of the team, and start planning the route, defining activities to be run at the Caravans. The teams will acquire knowledge on EU mobile citizens’ rights, learn and share forms to stimulate democratic engagement. They are going to network and learn from almost 60 activists who will gather in this transnational mobilization workshop in Warsaw on behalf of Transeuropa Caravans, as well as European May and School of Transnational Activism – all being run by the European Alternatives.

3. Face-to-face training in Berlin, 12-14 April (3 days): where the teams will further map interesting initiatives that may become stops on the routes, and where they will advance in developing innovative forms of formats if engagement of citizens to be used as part of the Caravans.

4. Online training in Autumn 2019, exact date to be confirmed (1 day): the training will deepen the team knowledge of EU mobile citizens rights, including obstacles, avenues and best practices for citizens participation.

5. A gathering with all the activists and participants who travelled across Europe along the different routes, coming together at Transeuropa Festival in Palermo: beginning of November, exact date to be confirmed (2 days).  The Transeuropa Festival will present results of our common efforts taken throughout the whole project.

In each Caravan, we are composing teams of 4-5 people who will take one of the following roles:

The whole team will be responsible for preparing meetings, debates and fieldwork visits in different locations, ensuring their participatory and European dimension.

Missing any information? You can contact our project manager Gosia: g.wochowska@euroalter.com

The content of this Call represents the views of the author only and is his/her sole responsibility. The European Commission does not accept any responsibility for use that may be made of the information it contains.

European Alternatives
Ahead of the 2019 European Parliament elections, a group of young activists travelled throughout fifteen European countries on board of five caravans reaching out to places of struggle and resistance, in defense of fundamental rights beyond borders.
Read more