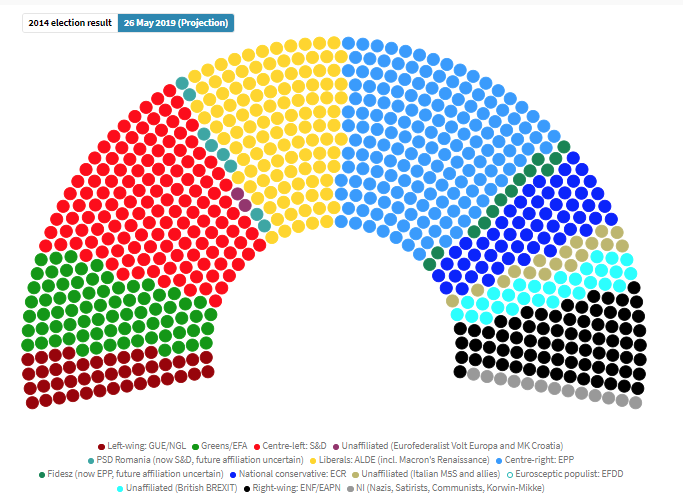 1. The results of the European Elections 2019 show us that after a decade of crisis in Europe, politics is now resolutely European.

The 50 per cent turnout is just one indication. The future of Europe and the European Union is now a central political topic in all countries. This does not mean that the elections were fought and won on European rather than domestic issues, rather it means that domestic and European issues are now deeply interwoven. Likewise, this does not mean there are only several competing visions of how Europe should look, rather this is the birth of a Europe of many visions.

2.The nationalist, xenophobic and chauvinist far-right may not have done as well as they and some journalists anticipated, but their presence and the presence of their ideas must not be underestimated.

The strong results for the Brexit Party in the UK, the Lega in Italy, Rassemblement National in France, Vlaams Belang in Belgium, Fidesz in Hungary and Law and Justice in Poland amongst others are deeply concerning. These results will have immediate implications for vulnerable people in these countries, undermine European values and pose a threat to European democracy. Their presence in the European parliament must not be normalised, just as their presence in national government must not be normalised. These parties are part of different European groupings for the time being, but this does not prevent them working together and feeding collectively from the hate each of them sows.

3. The era of the grand coalition of PPE and PES is finished, and the technocratic politics it facilitated must also end.

The coming weeks will see the re-organisation of the political groups in Parliament, new alliances and negotiations with the Council on the new European Commission. In this process, European progressives, leftists, ecologists and democrats should be insisting on a common commitment to the values of anti-austerity, social justice, ecological transition, gender equality, the rule of law and anti-corruption, media freedom, and migrant rights and welcome. There is sufficient agreement between the Socialists, Liberals and Greens around these values to work together: unity in diversity is our strength. We must not allow the right and far-right to paralyze the European institutions, block European solutions to common problems, or undermine social, human and ecological rights.

4. Too many leftist parties have become stuck because of dogmatic opinions concerning the European Union and an outmoded model of nationalised economies.

Trapped by the idea that the European Union is necessarily and unchangeably neoliberal, too many leftist parties have surrendered their emancipatory ambitions to change the world at a time when the vision and lives of citizens crosses borders. Conversely, ecological and Green parties have succeeded in appealing to those concerned about the deleterious effects of capitalism by embracing the European Union as a strong actor to change this.

5. These European elections have shown that citizens can influence the future of politics on a continental scale in other ways than voting.

Climate activism, Fridays for Future, the Extinction Rebellion and an extensive network of NGOs have all contributed to the green wave in Europe, not just in the unprecedented score for Green parties, but also in the commitment to green politics shown by many parties. This was achieved by a new generation working across borders. We need to continue to shape climate politics in this way, and also learn to do the same when it comes to social justice, migrant rights, women and LGBT rights and reforming the economy so it works for people and planet not financialised capital.

6. The European elections have become genuinely European despite the outdated nationalised form of the elections themselves.

Transnational lists for the next parliamentary elections must become a key demand for all those who believe in European democracy. Extending the right to vote to 16 year olds across Europe now has renewed justification, as does welcoming civil society into the European opinion-forming and decision-making process between elections.

7. Over the coming 5 years progressive, leftist, radical and ecological Europeans should work together across borders to shape a new common agenda for the European Union, both inside and outside the European institutions.

European Alternatives will continue to work in this direction with our partners, and through the School of Transnational Activism we aim to share learning amongst a new generation of activists to do this. Let the 2019 elections be a beginning of a new form of European politics.