On the Road to Rome 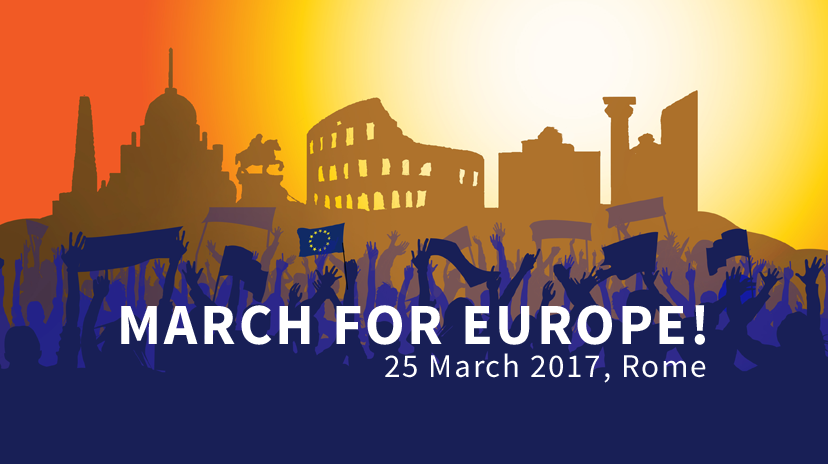 Over the past decade, European Alternatives has extended its membership, network and activity across the length and breadth of the continent and beyond. Today, 10 years on from our first activities at the 50th anniversary of the Treaty of Rome, for the 60th anniversary, we are joining and co-organising major events and initiatives in the city of Rome and work fervently to call together a coalition of citizens and organisations to at once imagine, demand and enact an alternative for Europe. We know it can be done; indeed, it is the only realistic option for a liveable future. The status-quo cannot and must not hold, and regressive nationalist fantasies offer no solutions.

“We are coming together to mark the 60th anniversary of the signing of the Treaty of Rome in the full knowledge that we must change Europe, to stop it from falling apart, to avoid a social and environmental catastrophe and to keep authoritarianism at bay.

Our common heritage, built on victories and progress in the area of rights and democracy, together with our welfare state, is being eroded, as are our hopes and aspirations. In recent years, because of unfair treaties, austerity, the predominance of finance, the rollback of entitlements, increasing job insecurity and discrimination against young people and women, Europe has also experienced an increase in inequality and poverty.

Today we stand at a crossroads and must choose: between saving human lives and saving banking and finance; between fully guaranteeing and gradually eroding human rights; between peaceful coexistence and war; between democracy and dictatorship. Mistrust, fear and social insecurity are increasing, while racism, reactionary nationalism, walls, borders, and barbed wire are on the rise.

Another Europe is necessary, urgent and possible, and it is up to us to create it. We must denounce policies that threaten Europe’s very existence; demand supranational democratic institutions that truly have a popular mandate, and are adequately resourced; respect the rights enshrined in the European Charter of Human Rights; defend positive achievements; propose alternatives and fight to make them a reality whether in the Mediterranean area or beyond Europe’s borders.

We need an innovative and courageous plan for European unity: a plan that guarantees a viable future for everyone based on democracy and freedom, rights and equality, a willingness to embrace gender issues, social and climate justice, dignity for people and the work they do, solidarity and openness, peace and environmental sustainability. Instead of putting the Italians, French or English first, we must put everyone first: northern, southern, eastern and western Europeans; people born here and migrants alike; men and women.

Let Rome be a wellspring of solidarity and unity that allows us to create a framework that transcends our differences and equips us for the challenges facing us on our continent and all over the world. We invite you to respond to this call, to promote, within this common framework, other upcoming events and gatherings in Italy and all over Europe, and to come to Rome on 23, 24 and 25 March, to engage in initiatives, meetings, actions and activities that will allow us to stand together, in solidarity.”

For subscriptions and info: nostraeuropa2017@gmail.com

CALL FROM The March For Europe:

“For 60 years the European Communities and then the European Union have helped ensure Europe’s peace, prosperity and progress. Europe has guaranteed peace and the rule of law after centuries of wars. Europe has been the driver of democracy for European countries escaping dictatorships and totalitarianism. Europe has been crucial for the economic and social progress of European countries over the decades. Europe has inspired other regions of the world in their search for unity and modernity. Yet, Europe remains an incomplete construction at risk of collapsing if not completed without delay.

Faced with a struggling economy and fading influence in a globalised world dominated by continental powers, we Europeans cannot close ourselves within national borders hoping to fence problems off. European states will have no future if they remain divided and compete with each other instead of standing united. Going back to nationalism will weaken us all. We can stand up to European challenges only together, by completing Europe’s political unity.

We call on the Heads of State and Government meeting in Rome on 25th March 2017 to approve a roadmap to relaunch and complete Europe’s economic and political unity.

As the European Union has a single currency, the Euro, there should be a European economic policy with European own resources to modernise and relaunch the European economy. As the European Union has a common external border, it should be managed jointly by a European border force. As wars and instability afflict the regions around Europe, European defence forces should protect Europe, help to pacify our neighbourhood and contribute to managing international crises and conflicts. As threats of international terrorism and international crime increase, they should be prevented and combated through European cooperation and with European support. As national democracies can’t govern political and economic forces beyond national borders, only a European government and a truly European democracy would allow European citizens to control their own destiny.