The most ‘European’ Europeans? The politically invisible 17 million EU citizens 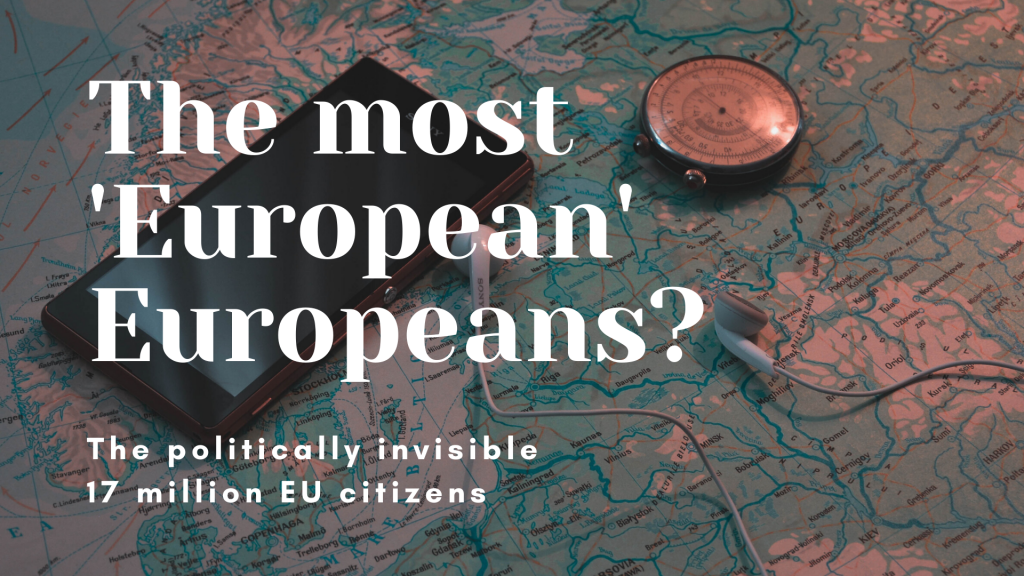 On 1nd April 2020, HEC Paris (Chair Jean Monnet), European Alternatives and Groupes d’études géopolitiques (GEG) in partnership with Europe’s Futures Program of IWM Vienna, are convening an international interdisciplinary conference in Paris to address, for the first time, the emerging and yet overlooked phenomenon of the “invisible” 17 million mobile citizens.

Under the title “The most ‘European’ Europeans? The politically invisible 17 million EU citizens” the conference aims to bring ideas for reflection of the realities of Europe and its citizens.

There are at least 17 million EU citizens who live today in another EU member state, including the 3.7 million living in the UK. In the last decade they have doubled in number and today represent 4% of the EU working-age population. They epitomise a growing, yet unnoticed Europeanisation of our societies, further accelerated by job precarity and the fallout of the 2008 Financial Crisis. In addition, at least 2 million citizens commute daily across borders, and hundreds of thousands of seasonal workers move across the continent to take up low-wage jobs. Together, there are 20 million EU citizens spread across the continent.

Together, there are 20 million EU citizens spread across the continent. Many of them don’t see the need to register when changing residence and often live in an administrative limbo between countries.

This geographical dispersal, engendered by decades of free movement and open borders, renders their count imperfect. Many of them don’t see the need to register when changing residence and often live in an administrative limbo between countries. The collective imagination portrays them as a European elite, the happy few who, perhaps having benefited from the Erasmus study programme, criss-cross the continent in search of self-improvement. A look at the actual data reveals a clearer picture. On average, the mobile EU citizens find it easier to get a job in another EU country than in their country of origin, regardless of their skills. This likelihood is even greater in the case of female workers. People who stopped school after primary and people who went on to university are both significant groups amongst mobile EU citizens. Europeans a moving for work, study, love, curiosity and more reasons.

They are much more diverse than they’re generally portrayed as being. While they are not yet a self-aware, established community, they contribute a huge amount, economically, socially and culturally, to the regions where they live as well as to those they come from. Yet, they are deprived of the right to political representation in their new country of residence, with one exception: they can vote in local elections. This reveals a bitter truth. Those citizens whose lives are arguably the most “European” are the least politically represented. At a time when the European Parliament is more fragmented than ever, the policies of the European Union are increasingly contested in national public debates, but where each country is becoming more Europeanised in myriad ways, investigating the lack of political voice of those citizens who move between countries and contexts is a way of understanding the current predicament of European democracy and its possible evolutions.

Those citizens whose lives are arguably the most “European” are the least politically represented.

Understanding the predicament of the community of 17 million mobile Europeans, and a comparison of this group with the more settled European population as well as a the mobile non-European population, are important starting points for a reflection and a re-discussion of the realities of Europe and its citizens: this conference aims to set out a research agenda on this theme and bring together a community of scholars and practitioners for future work.

Are you interested in the topic? Send us your abstract paper and participate in the conference!

For this occasion we are launching an open call for papers on the topic that will be published in a special issue of Le Grand Continent and, potentially, in an edited volume.

Abstracts should be submitted to 17millionconference@gmail.com by 31st January 2020.

Abstracts should be 250 words maximum in length. They should be titled and have all requisite bibliographic citations. Along with the abstract, please include a detailed, recent curriculum vitae/resume (no longer than 3 pages).

Abstracts will be evaluated according to the following categories:

If your abstract is selected, you will be notified by 10th February 2020.

If your abstract is selected, you should submit a draft of the paper to be circulated to discussants by 1st March 2020. The final papers should be 5000 words maximum

The authors of the most promising abstracts will be invited to present their work to the conference in Paris.