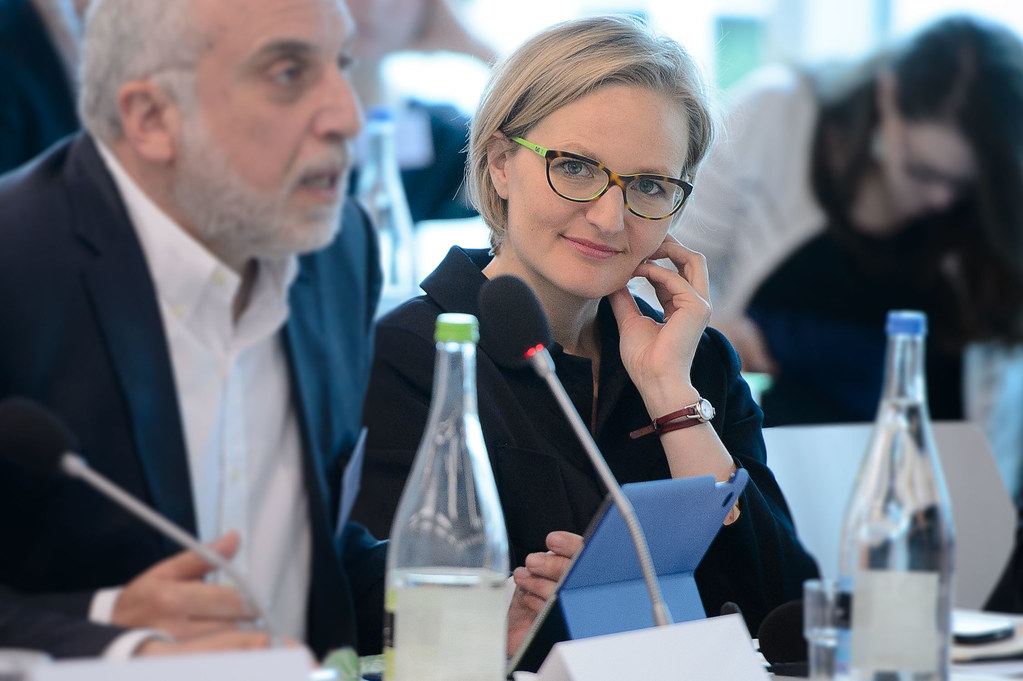 Franziska Brantner is an MEP in the Greens-EFA Grouping, and is a member of the Foreign affairs and relations with Isreal committees. She took part in the negotiations on the formation of the European External Action Service on behalf of the Greens-EFA. She is a fellow of the Henrich Boell Stiftung.

On 8th July the European Parliament voted to approve a text on the formation of the European External Action Service (EEAS), a new civil service for the foreign affairs of the EU created by the Lisbon Treaty. A few days before the vote, European Alternatives talked with Franziska Brantner MEP, who participated in the negotiations on the text on behalf of the Green-EFA group in the European Parliament. We asked her what the priorities had been in the negotiations, and what progress had been made, as well as how to improve the democratic legitimacy of Europe’s external action, and the role of civil society.

European Alternatives: The European Parliament has been in negotiations with the council, commission, and Catherine Ashton about the new European External Action Service. What would you say were the priorities of the European Parliament in these negotiations? Now that an agreement has been reached on the outlines of the new EEAS, do you think the parliament was successful?
Franziska Brantner: It was important to include the EEAS in the ‘community method’. What was most important to the parliament was to make sure that the new EEAS would not be outside community budget control. There should be as much financial accountability for the new EEAS as there is for the European Commission. The first proposal that was on the table, drawn up by Catherine Ashton, the High Representative for Foreign Affairs and Security, was not very clear about the right to discharge, and how to hold accountable the people making the decisions about how the money is spent. The easiest way of ensuring the accountability would be to make it be part of the Commission, because then there would be the same means of control as for the Commission. Then we could keep the rules the same.

We’ve got now a deal which enhances the draft in ensuring that the tax payers’ money is accountable. Our other priority in terms of the community method was to make sure that current financial instruments (development and stability instruments, for example) remained under the control of the Commission. This was particularly important for the development community which wanted the EU’s action to remain strongly development focussed and that this should not be subordinated to other foreign policy objectives. On that we succeeded to some degree and with regards to development instruments the last word stays with the Commission, even though the programming is done partly in conjunction with the external action service. We didn’t manage to obtain the same with stability funds and other classical foreign policy instruments. Another priority of the parliament was to insert some substantive issues into the negotiations, this was the main interest of my own group, the greens. Human rights, peace and crisis management … the Ashton first draft of a blueprint for EEAS didn’t mention ‘human rights’ at all.

Now we have managed to get a human rights focal point in each delegation (in each embassy of the EU abroad) and a headquarters to ensure that human rights are a priority at the highest level of the EEAS. So on human rights we managed to achieve quite a lot. We also wanted the Commission and Council structures for peace and reconciliation to be integrated in the new service. There we did not succeed because the nation states are really ring-fencing their Council structures and insisting that they work under their own procedures. Some member states wanted to keep their own structures independent within the EEAS, and subordinate the Commission to them. This is the worst possible scenario – member states keeping their own structures and subordinating Commission resources and staff. We managed to keep them at level footing, even though they are separate. Regrettably, we didn’t manage to integrate them in a smart way. There we lost out against member state pressure. In the first draft there was an all powerful secretary general who had the financial rights, the programming, the representation rights … this person would have been more powerful than Ashton, everything would have gone through him. This was unacceptable to the parliament. If you had asked me which job I would have preferred, Ashton’s or the secretary general’s, I would always have chosen the secretary general : he had all the financial control, all the programming, also the representation and he was the bottle-neck through which everything had to go.

There is now a financial director responsible for finances, and two deputies responsible for coordinating the team. So there as well the parliament was successful. Where we lost out is on the question of who comes to represent Ashton when she cannot come to parliament, which she won’t be able to do all the time. Unfortunately the deal is that it will be the Commissioner when it concerns Commission affairs, and the rotating presidency comes when it concerns Council affairs. This is really a shame because it brings back in the rotating presidency, back into foreign affairs, whereas in the Lisbon treaty we thought we had got rid of it. This was a way for national foreign ministers to keep their foot in the door of the EU’s external policy. All in all I would say that we won some important battles and we lost on some points, and we’ve managed to open plenty of useful doors.

EA: I want to ask about the priority of development in the EU’s external action. Several months ago Judith Sargentini wrote an article for our website about article 208 of the Lisbon Treaty, which says that eradicating poverty should be the major goal of the EU’s development policy. Do you think this goal has been respected in the agreement over the EEAS?

FB: As a result of the negotiations, development policy of the EU remains under the responsibility of the development Commissioner. This means it should not be subordinated to other priorities, but should remain a major focus. We even managed to get a mention of article 208 in the text. But I should point out we don’t only do foreign policy to eradicate poverty: we also do it to promote human rights and democracy, we do it to promote peace. These are the three big areas we do foreign policy for. It was important to ensure that eradicating poverty was not subordinated to national concerns, and the best way to do it was to ensure it was under the responsibility of the development commissioner. But it was equally important to insist on the other two areas, and as I have already said, we won on human rights in getting a focal point on this in each delegation, and there is more work to do on the peace and stability objectives of EU external action.

EA: As a representative in the European Parliament, how do you think the democratic legitimacy of EU’s external action can be improved?

FB: The Lisbon Treaty didn’t change the decision making of the European Union on foreign policy. It did in other areas, such as the agriculture budget, but foreign policy clearly remains an intergovernmental affair. The parliament really needs to have more of a role in discussing European foreign policy. Have you ever heard anyone discuss the success or failure of our missions in Congo? no. Who was responsible for the debate about that? no-one. It doesn’t happen in the national parliaments … it happens in the European parliament but nobody cares about that. This is an area where the parliament needs much more power. Once the European parliament has a role in discussing the policies afterwards, perhaps soon it will have a right to discuss policy decisions beforehand. But what I think is perhaps even more important is to give up unanimity amongst the member states in the area of foreign policy.

EA: What do you think the role of civil society should be in the EU’s external action, and does the creation of the EEAS give more opportunities to civil society to participate in the making of EU foreign policy?

FB: I think that is one of the major concerns along with transparency and accountability. It is especially an issue when entering into relations with non-democratic countries, because the only source of information is the government themselves, and civil society in these countries cannot take part in the negotiations. Take the example of Zimbabwe: good luck to civil society which wants to have an influence on the negotiating position of that country! We tried to get civil society focal points in each of the delegations: there should be someone responsible in the delegations for communication with civil society. This was one of the major priorities of the Green group in the European parliament. Unfortunately it didn’t get through.

Under the new rules established by the Lisbon Treaty, the parliament will now have to approve international treaties entered into by the EU. That is a battle which is going at the moment between the Parliament and the Commission. When does the Commission have to tell the parliament the details of the Treaties so that the parliament can discuss them? If they tell us only at the end of the negotiations, it is too late to have any influence. Take the example of Libya, where what I’ve heard is that we’re doing some pretty dirty deals so that we can get rid of our refugees.

The Commission has taken the ridiculous position that it will not tell us the legal basis of negotiations with Libya until the end of the process – this means they are only going to tell us afterwards that we had a right to be involved since the start.