Best of European Alternatives in 2017 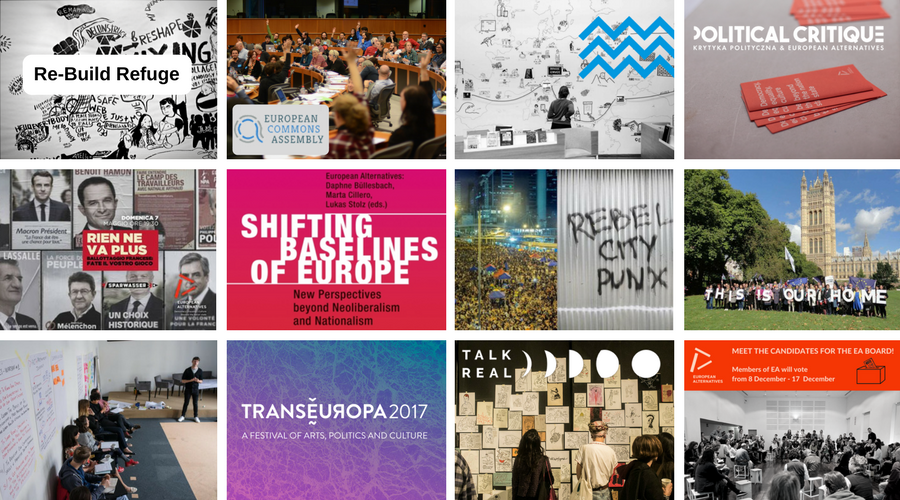 What we have achieved this year?

As 2017 comes to end, we want to take a look back and see what we have achieved this year with our members and partners, both at the grassroots and the institutional level. In our effort to bring Europe closer to the citizens, we have worked in 2017 mobilising citizens across the continent via debates, open events, international seminars, online and offline articles, video productions, social media campaigns, and specially, TRANSEUROPA Festival 2017 aiming to reverse the European apathy. 2017 has been especially important for us because we celebrated our 10th anniversary in Rome at the MAXXI museum over a day of debates and actions around the idea of Europe.

At the end of October, together with over 150 activists from all over Europe, we organised TRANSEUROPA Festival 2017 under the title “Convergent Spaces” together with our friends and partners from Zemos98. In the past decade, TRANSEUROPA has attracted thousands of participants through a decentralised event structure in over a dozen European cities and a high profile moment in one city. For the 2017 edition, Convergent Spaces, the main city for TRANSEUROPA was Madrid and it counted with the official support of the city council. The Festival ran over five days in October covering three main thematics: Europe as a refuge, Cities of Change and the Commons, through a mix of formats ranging from lectures, participative workshops, artistic interventions, performance, cinema, music and political debates.

2.Art Real: shifting discourses about migration through art and culture

In 2017 Talk Real launched ‘Talk Real – Art Real’, a series of episodes about artistic projects and social practices from grassroots movements that aim to counteract the dominant discourses of crisis and threat in the so-called “refugee crisis”. Art Real counted with the moderation of Maragarita Tsomou, and with the participation of key speakers such as Oliver Ressler, Lucila Rodriguez Alarcon, or Navine G. Khan-Dossos. The series of episodes was part of our new project ‘Re-Build Refuge Europe’, a project that has brought together partners from the UK, Sweden, Spain, Finland and Germany, and Greece. The project has worked to produce innovative practices that could allow European citizens and refugees to work together on equal footing and learn from each other.

3. Cooperating with the Western Balkans activists and civil society

We have been part of the Democratic Left 2018, a process coordinated by Friedrich Ebert Stiftung. Our role included editing the Manifesto of DL18 and producing Talk Real video discussions to make visible key challenges in the Western Balkans nowadays. Together we have made strong policy recommendations for the future of the region which will be taken to decision makers.

What if another Europe already exists? This year we also published a new book following this question and exploring a Europe beyond Neoliberalism and Nationalism. Shifting Baselines of Europe is build upon interviews and essays with contributors like Etienne Balibar, Ulrike Guérot, Gesine Schwan, Renata Avila, Barbara Spinelli, Andreas Karitzis, among others, and interviews with city governors from Madrid to Naples. Experiences from the municipal level to the level of transnational media, from technology and counter-surveillance, to a concrete proposal to revive the European refugee policy. The book proves that a shift towards a new way of thinking and doing politics is not only possible, but actually already happening. You can download the book for free here.

This year we decided to join forces with our friends from Krytyka Polityczna in order to develop a transnational media network able to speak beyond European borders. With our magazine PoliticalCritique.org, we offer an online space and community for a more connected generation of active citizens that engage with current events and social issues. This new alliance directly connects with our common objective of connecting the already existing audiences at the national level towards a shared European agenda setting, knowledge and imagination.

6. Hundreds of activists mobilised across Europe

With Transeuropa Open, multiple debates and workshops as well as election parties, members of European Alternatives organised more than 30 local events in different cities and carried out actions to raise awareness that a transnational civic space exists as well as alternatives to politics as usual.